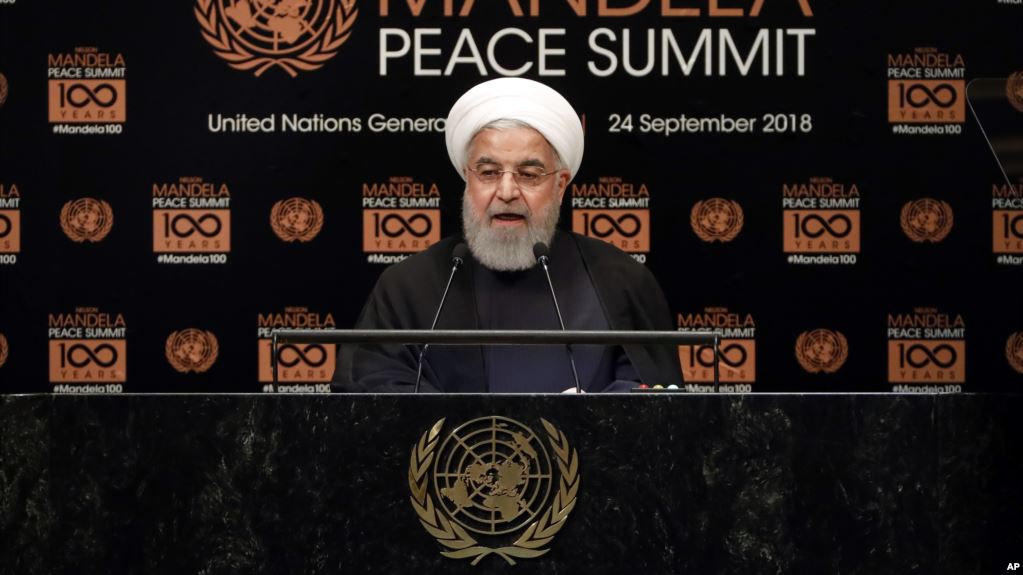 Iranian President Hassan Rouhani says he has no plan to meet his U.S. counterpart at this week’s U.N. General Assembly in New York, dismissing U.S. comments that President Donald Trump is open to talks.

In a Monday interview with U.S. TV network NBC, Rouhani said there is “no such program for a meeting” with Trump, who withdrew from the 2015 nuclear deal between Iran and six world powers in May and started a process of re-imposing economic sanctions on Tehran.

The U.S. moves are part of a campaign to pressure Iran to give up perceived nuclear weapons ambitions. Iran denies seeking a nuclear bomb.

“Naturally, if someone is keen on having a meeting and holding dialogue and creating progress in relationships, that person would not use the tool of sanctions and threats [and bring] to bear all of its power against another government and nation,” Rouhani said, referring to Trump. “That means that the necessary willpower is absent in order to resolve outstanding issues.”

U.S. officials have said Trump is open to meeting Rouhani on the sidelines of the General Assembly, but has not scheduled any direct talks.

“Maybe someday,” say @POTUS this morning of meeting Iran’s Pres., but not now. Though might run into him at the UN today or tomorrow. Happened to Pres Clinton when he had not plans to meet Fidel Castro, but ran into him at the UN. https://t.co/fOBm4qZbfg

On Tuesday, Trump said there are no plans for such talks but added “maybe someday in the future, I’m sure he [Rouhani] is an absolutely lovely man.”

Trump has said he is willing to negotiate with Iran to reach a new deal to curb its nuclear and other perceived malign activities. But Rouhani told NBC that Washington must rebuild what he called the “bridge” of the 2015 nuclear deal in order for talks to happen.

Speaking at a U.N. press conference on Monday, U.S. Secretary of State Mike Pompeo said the Trump administration is making a “fervent effort” to stop Iran from being what he called the world’s largest state sponsor of terror.

Pompeo cited the U.S. reimposition of a first set of economic sanctions against Iran last month and plans to reinstate tougher U.S. sanctions on the Iranian oil and gas industry in November.

“Our actions in and around the Middle East have made clear we will not continue to accept Iran’s bad behavior,” Pompeo said. In the past, Iran has said it is a victim of terror rather than a perpetrator.

Ilan Berman, senior vice president of the American Foreign Policy Council, told the Monday edition of VOA Persian’s News at Nine program that he does not believe a Trump-Rouhani U.N. meeting would be proper.

“If there is a deal to be made (by Trump), it won’t be made with Rouhani,” Berman said in an interview last Friday. “It must have buy-in from the clerical leadership in Iran.”

The five world powers remaining in the 2015 nuclear deal with Iran – three of them from the European Union – have said they want to sustain the agreement. But in a live appearance on Monday’s News at Nine, former Italian Foreign Minister Giulio Terzi said he sees a shift in Europe’s mood on the issue.

Terzi said in recent months, hundreds of European Union and Italian parliament members have asked their respective governments to review their approaches to Iran, in light of the toughening U.S. policy.

“(Those lawmakers believe) the nuclear deal has not produced the results and positive developments that were expected, in terms of (Iran’s) support of terrorism and recycling of money for terrorist activities, and first and foremost, (in terms of) economic transparency (in Iran) and a clear development of Iranian society,” Terzi said.