TO CRUSH ISIS, ASSAD MUST GO AND IRAN’S WINGS MUST BE CLIPPED

Home Rassegna stampa TO CRUSH ISIS, ASSAD MUST GO AND IRAN’S WINGS MUST BE CLIPPED 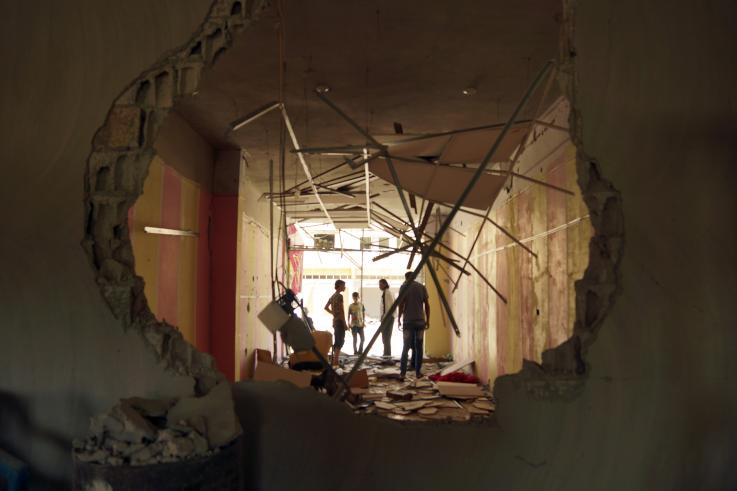 Images of people pouring out of a concert hall, many wounded and others lying facedown in a pool of blood. Explosions during a football match and looks of fear, pain and horror.

This is what the world saw in France last week, something it saw less than a year ago and in previous years—acts of violence and the terrible wounds they leave on innocent people.

Just as summer turns into autumn, autumn to winter and winter to spring, this attack is also part of a cycle, and there is a good chance it will be followed by another in the near future. Islamic fundamentalist organizations such as the Islamic State militant group (ISIS) are trying to overpower Western democracies on our own soil, and we must act urgently to halt their advances.

This, unfortunately, is the new reality faced by the Western world. It constitutes an incredibly difficult challenge, no doubt, but if we address it at its roots, we can break this cycle of violence, death and fear.

Syria and Iraq are ISIS’s hub, a base for organization, recruitment, training and weaponry, and the West must intensify its campaign to end this epicenter of evil. However, attacks against ISIS alone will not stop the cycle of violence. We have to fight against the triggers of radicalization as well and combat this cancer at its root.

That means the West ought to be unequivocally decisive in pressing for the ouster of Syrian dictator Bashar al-Assad, whose carnage against the Syrian people amounts to a crime against humanity and has provided the unsavory social and political circumstances for the rise of ISIS. At the same time, we need to work urgently to eliminate the sectarianism being spread by the Iranian regime and its allies in the region.

Here in Europe, any broad reaction of collective punishment against Muslim immigrants would be not only horribly unjust but also dangerous. Eight people caused last week’s reign of violence. That’s a minuscule percentage amongst a huge number of refugees and an even smaller percentage amongst a population that represents over 10 percent of France.

Let’s instead remember recent history. It was a Muslim who saved Jews during the attack last January on a Jewish store and a Muslim policeman who was killed defending Charlie Hebdo journalists who ridiculed his faith. These immigrants are escaping horrors perpetrated by the same people who carried out or were the root cause of last week’s attack in Paris.

Focusing on the extremists amongst a largely peaceful population means focusing on ISIS and also on Iran and its proxies.

Before ISIS, Iran invented the notion of exporting Islamic extremism; propped up regimes in Iraq, Syria and elsewhere; and encouraged them in the implementation of sectarianism and rampant bloodshed. Even if the Shiite militias that acted as killing squads against Sunnis in Iraq, or perpetrated widespread massacres in Syria, didn’t entirely cause ISIS’s rise, they undeniably added fuel to the fire and continue to do so.

There should be zero tolerance by the West for Iran’s nefarious meddling in Syria, and, as members of Syria’s pro-democracy opposition have said, there should be no question about giving Tehran a say over Syria’s political future.

If the U.S. invasion in Iraq has taught us anything, it is that imposing an ideology that is not popularly supported, from the outside alone, is a disastrous policy. Instead, working with moderate stakeholders committed to inclusive rule, similar interests and, if possible, similar values is a far better path to take.

That means working with Kurds and moderate forces in Syria to replace Assad and battle ISIS, but it also means working with those same allies against Iranian extremism. Luckily, in that case, we have a large, organized partner with whom we share not only the goal of inclusive rule, or even interests, but also values. That group is the National Council of Resistance of Iran (NCRI).

Maryam Rajavi, president-elect of the NCRI, a moderate Muslim woman leader who is fiercely anti-fundamentalist, said immediately after the Paris attacks that fundamentalism under the name of Islam has nothing to do with this religion, whether it is under the pretext of Shiite extremism or under ISIS’s Sunni brand. Such anti-human crimes have nothing to do with Islam, and such evil is the enemy of peace and mankind wherever it exists.

Moderate policies at home, including identifying with moderate Muslims who are our allies, coupled with military countermeasures that strike ISIS in its lair, are the best defense France and indeed the West can produce. But any gains will soon dissipate if we’re striking at one extremist group while ignoring another.

A piecemeal solution is going to be short-lived. To not see more carnage next season, the order will be to get rid of Assad as expeditiously as possible and stop Tehran’s meddling in Syria as his main backer.

Let there be no illusion. Assad and Iran make up the second half of this extremist equation, and we must work with moderate allies to combat them as well. Only then will we be able to break this cycle of violence.